MLE are some of the three scariest letters for a Looper or an Admin. Where normal loopers increase system stability within the loops, MLEs essentially do the opposite. They don't necessarily cause every Loop in which they appear to crash, but averting the outcome tends to require not insignificant effort on the part of active loopers.

The how and why will vary from MLE to MLE. Some do it intentionally because they see no harm in doing something with no consequence, some do it unintentionally simply by being there, and some genuinely want to destroy reality. Regardless of the motives or the methods, MLEs are the source of frustration and pain for any other Looper that they come across.

Some loopers, such as Pikachu and Anakin Skywalker, are known to put out rewards for non-loopers to find and capture MLEs during loops. While is not that effective, particularly for physically stronger MLEs such as Dio Brando and Vilgax, it does help loopers to figure out if a MLE is active in their loop, particularly in expansive loops.

It was commented by Piplup, Chimchar and Pikachu that there are at least a dozen MLEs known to be on the loose in the Multiverse. These include:

The best known and most cited MLE in existence at the moment, Kyubey was responsible for the destruction of the Puella Magi universe by causing Madoka to Ascend. Kyubey escaped into the greater multiverse and is still on the loose. He has since been seen in multiple universes including the Smurfs and possibly even Equestria. Kyubey's main goal is to learn how to Ascend the way Madoka accidentally did, so he can write entropy out of all realities forever. This would cause multiple problems, in addition to quite possibly destroying the Loop he Ascends in, since several Loopers are somewhat representatives of entropy.

The eternal vampiric enemy of the Joestar Bloodline who is the adopted brother of Jonathan Joestar, father of Giorno Giovanna, and whose plans were the catalyst of a universal reboot within the JoJoverse, Dio was introduced with a very painful death for Ash Ketchum. Dio's goals often include tormenting all members of the Joestar line and their allies while attempting to 'reach Heaven', which entails Dio taking control of the very fabric of reality and molding the universe into his vision of 'paradise'. The origin of his status as a MLE seems to be occurring during the Grand Battle.

He'll be destroyed once the Infinite Loops end due to this.

In part due to the knowledge that his plans are going to end up going dramatically downhill following the Loops, and in part because he has finally become aware of the folly of destroying the very world over which he intends to reign, Dio has declared his intention not to Ascend until the conclusion of Yggdrasil's repairs, first within his own Branch, and then within the My Little Pony loops. (MLP Loops 197) Applejack was able to attest to his sincerity, but convincing the Admins and other Loopers of this fact will be a much more difficult pill to serve up, particularly due to the fact that he has not renounced his villainous ways

Tick is his world's anchor, and a rather disturbed fellow from a loop where general physics and sense are lacking. As a such, he acts in irrational ways that make him just as impossible to reason with as MLEs like Kyubey, and frequently attempts to 'fix' Yggdrasil despite copious evidence that such attempts by loopers can only make the problem worse.

Billy, a titular character of The Grim Adventures of Billy and Mandy, is considered the most absolutely stupid human being in the loops. He has killed Han and Anakin twice, pissed Caboose off to the point of him gaining lucidity and shooting Billy, maimed the Mane Six and killed Twilight, crashed a punishment loop, and is singlehandedly responsible for Gendo Ikari looping. What stretches the point of turning him into an MLE is that during his Red vs. Blue, Star Wars and Evangelion loops, it was undetermined if he was even awake. He differs from the Tick in that he is more or less goalless: his actions don't stem from an intrinsic misunderstanding of his situation and his want to repair it, he's just that dumb.

As an evolving term, MLEs are not always such. Some have been stripped of this status after a time if they come to realize the error of their ways, if people come to discuss it and decide they are more Villanous Looper than MLE, etc etc.

Vilgax is a Chimera Sui Generis from the Ben 10-verse, and the ruler of the planet Vilgaxia (formerly known as Murray) he's a galactic conqueror/warlord and the archenemy of the Loops Anchor, Benjamin Tennyson. Vilgax is ruthless, cruel, and power-hungry. His primary objective seems to be obtaining the Omnitrix, so that he can use it to take over the universe, he's also known to hold a grudge against any who wrong him, this being most if not all the Ben 10 Loopers and probably many other non-native Loopers, despite his knack for using brute force, Vilgax is also a master strategist and is very manipulative, however, unlike most MLEs, Vilgax can be reasoned with, and despite his cruel and villainous tendencies, Vilgax does care about his own people (taking his role as Vilgaxia's ruler and champion very seriously), so much so that he is willing to put his own life on the line and use whatever other means necessary to ensure Vilgaxia's and its people's safety; even if it means begging his enemies for help.

Naoki Kashima is an anchor in the infamous Amalaverse. His sanity was stretched to the breaking point by having to repeat a trying baseline over constantly, with no variants, hardly any Fused Loops, and no chance of making it better due to a flaw in the Amalaverse. After a loop in Equestria, an unfortunate combination of the Nightmare Force, his Shadow, his repressed problems over his home loop, and discovering how peaceful Equestria normally is sent him into a berserker state. During most of that original Equestria loop, he was possessed by The Fiend, a combination of his Shadow and the Nightmare Force. The Fiend proceeded to act extremely sadistically, ensuring that Naoki would be labelled an MLE. Of course, Naoki's later actions in his berserk rage only confirmed this label. On appearing in a loop, Naoki would kill everyone in sight unless they had the power to beat him off. After Naoki had snapped out of the berserker mindset and discovered what was wrong with the Amalaverse, he calmed down to the point where he is no longer an MLE.

Paradox is a looper of the Yu-Gi-Oh branch, mostly connected to the 5Ds sub-branch, though he is known to appear in other branches too. He has time-travelling abilities, which he used to steal powerful dragon monsters from multiple eras, and use them to eliminate Duel Monsters. However, after several fights against the Yu-Gi-Oh anchors, along with the start of the Arc-V loops, he eventually calmed down, and aided the Arc-V loopers (including Pegasus, Jack, Crow, Kite and Alexis) in their fight against Zarc. Since that duel helped stabilize the Arc-V branch, Paradox has been saved from his status as an MLE, and no longer attempts to alter the timeline.

The evil future-tech clone of Roll Light and the distaff counterpart to Quint in the Loops, Waltz is, to put it bluntly, batshit insane. Her fondest pastimes involve killing, murder, mayhem, and destruction. For giggles mostly, and she finds the suffering of others very funny indeed. Her virally infected Yggdrasil code should have prevented her from looping at all, but she inadvertently exploited a singularly unique security hole during a failed attempt to activate the severely corrupt and glitched Megaverse, making physical contact with Roll her Awakening trigger. While the security hole has been fixed with the activation of the Megaverse, the damage was, as they say, done.

She eventually became a unique case when Hephaestus (with Skuld's approval) succeeded in clearing out the viral code, leaving only her original code, which consisted entirely of "her looks and one line of dialogue". This little amount left her ineligible to Loop, and made her essentially the first (and only) person to ever be deactivated as a Looper. As she is no longer a Looper, she is also no longer an MLE.

While certainly not quite at the same level of a true MLE, people who are a part of the following groups can be considered the next worst thing, and could possibly go on to be an MLE in their own right.

Dio Brando and The World 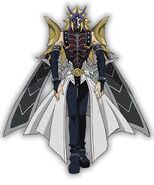 The Tick
Add a photo to this gallery
Retrieved from "https://infinite-loops.fandom.com/wiki/MLE_(Malicious_Looping_Entity)?oldid=9379"
Community content is available under CC-BY-SA unless otherwise noted.